Kevin Hanek most recently debuted in the title role of Verdi’s Otello in a production with New York’s Delaware Valley Opera. “Naturally, the centerpiece of the show is Otello himself, and Kevin Hanek’s memorable, seafaring Moor was mesmerizing. Commanding the stage, Hanek’s voice is strong and stunning in tone, clarity and range. His thrilling, vocally demanding solos were as riveting as his visage and the audience roared with approval at every turn. Impressive and incredibly versatile… nuance and subtlety, combined with a forceful, domineering interpretation of the character…” (Jonathan Fox, The River Reporter) He is a 2012 Grantee of the International Festival Society, and recently returned from a European audition tour, where he sang his first stage auditions for the Opéra National de Paris, English National Opera, and Barcelona’s Gran Teatre del Liceu. Mr. Hanek was represented by Hubbard-Levine Management for the 2008–2010 seasons, and debuted as tenor soloist in performances of Beethoven’s Ninth Symphony with the Reno Philharmonic in April 2010. He performed Erik in a staged concert version of Wagner’s Der fliegende Holländer at New York’s Bechstein Piano Centre, appeared as Riccardo in Verdi’s Un ballo in maschera and Radamès in Aïda in staged productions with Bulgaria’s Burgas Philharmonic Orchestra, and sang the Majordomo in the New York premiere of Hans Werner Henze’s The End of a World (Das Ende einer Welt) with Encompass New Opera Theatre. Kevin Hanek received an Emerging Artist Grant from the Hillsborough County Arts Council for his debut recital with pianist Norman Shetler, and performed with the Sarasota Opera as an Apprentice Artist.

A native of Miami, Florida, heldentenor Kevin Hanek’s early musical studies included work with French baritone Gérard Souzay and the great American soprano Eleanor Steber, as well as post-graduate studies at Vienna’s Hochschule für Musik with accompanist Norman Shetler, who would become a lifelong friend and mentor. Hanek’s time in Vienna was the first of many opportunities to live and work throughout the world, achieving success in a variety of fields, including a fifteen-year career as an award-winning book designer and art director in New York.

He was a 2010 Grantee of the International Festival Society, and recently returned from a European audition tour, where he sang his first stage auditions for the Opéra National de Paris, English National Opera, and Barcelona’s Gran Teatre del Liceu. Recent appearances include two recitals of German lieder this past spring for New York’s Delaware Valley Opera, and his debut as tenor soloist in performances of Beethoven’s Ninth Symphony with the Reno Philharmonic. He has appeared as Riccardo in Verdi’s Un ballo in maschera and Radamès in Aïda with Bulgaria’s Burgas Philharmonic Orchestra, and as the Majordomo in the New York premiere of Hans Werner Henze’s Das Ende einer Welt. Recent appearances include his debut of the title role in Verdi’s Otello in June 2012, in a new production with the Delaware Valley Opera.

Kevin Hanek will perform the title role in Verdi's Otello, in a new production with New York's Delaware Valley Opera in June 2012. He performed two recitals of German lieder there in 2011, part of the DVO's Voices of the Valley concert series, with soprano Kathy Geary and pianist Lucy Arner.

Kevin Hanek was awarded a grant from the International Festival Society in 2010, enabling him to travel to Austria to prepare Wagner's Die Walküre with renowned stage director Elizabeth Bachman and Deutsche Oper Berlin coach Kathryn Wright, culminating in a public performance of Act 1, Scene 3.

Kevin Hanek appeared with the Reno Philharmonic in April 2010 as tenor soloist in two performances of Beethoven‘s Ninth Symphony, under the baton of the Philharmonic‘s new music director, Laura Jackson.

Kevin Hanek performed the role of Radamés in Verdi’s Aïda onstage for the first time in July of 2006, in a production with Bulgaria’s Burgas Philharmonic and Chorus at the Burgas Opera House. He was invited back in 2007 to sing his first Riccardo in Verdi’s Un ballo in maschera.

Preparations are underway for a recital program to be performed with renowned lieder pianist Norman Shetler, accompanist to such luminaries as Peter Schreier, Dietrich Fischer-Dieskau, and Hermann Prey.

Shetler will accompany Hanek in a program featuring works by Loewe, Schumann, and Rachmaninoff, as well as Swedish concert songs by Hugo Alfven, and a group of songs by the early twentieth-century American Romantic composer Charles Tomlinson Griffes. 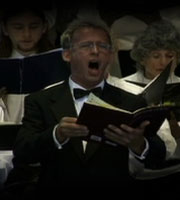 “Mr. Hanek displays a tenor voice with magnificent power and resonance, a sound that astounded us at Vassar a few years ago when he first sang the Tomb Scene of Verdi’s Aïda. More recently, he sang some Wagnerian excerpts for me with enormous bite and authority, a sound that indicated the presence of a true Heldentenor in the making. He should be encouraged in this direction”